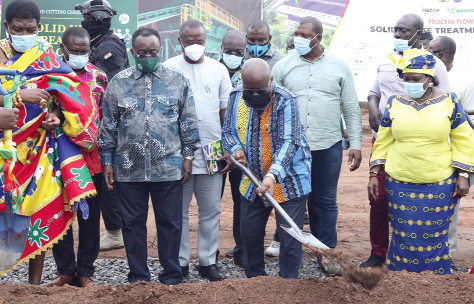 The plant will have facilities for plastic waste recycling, finished products, and spare parts, compost, and sorting workshops, among others. Benefits The President mentioned the benefits to be derived from the project to include the effective and efficient management of municipal solid waste, the production of organic compost for horticultural and agronomical purposes, a reduction in the high rate of plastic pollution, and the processing of recyclable fractions of waste such as paper, plastic, and metal for reuse. “Equally more important will be the provision of jobs for the youth in this community and its environs, which will help improve the local economy,” he added. As co-Chair of the Eminent Group of Advocates for the 2030 UN Sustainable Development Goals, President Akufo-Addo said the intervention would help the country meet the goals on clean water and sanitation (SDG 6), good health and well-being (SDG 3), decent work, and economic growth (SDG 8), sustainable cities and communities (SDG 11) and climate action (SDG 13). He urged Zoomlion and other waste management companies to ensure that the construction of such facilities was done according to required standards and specifications.

Vision The Minister of Sanitation and Water Resources, Mrs. Cecilia Abena Dapaah, said in view of the government’s vision of a clean Ghana, the fight against improper sanitation and waste management had been given a boost by the establishment of solid and liquid waste treatment plants in the regions. She entreated the people to refrain from practices such as open defecation and indiscriminate dumping of refuse, especially into drains. She also said her outfit was partnering Zoomlion to construct waste treatment facilities in all the 16 regions of the country. According to Ms. Dapaah, a similar project would be commissioned in Goaso in the Ahafo Region next Sunday. Job creation The Executive Chairman of the JGC, who doubles as the CEO of the Jospong Group, Mr. Joseph Siaw Agyepong, said the plant, when completed, would create 75 direct and 250 indirect jobs. “After the sod-cutting by the President, we are starting the construction immediately. All the machines are ready to facilitate the project,” he said. He thanked the chiefs and the people of the region for offering his company a 100-acre land to construct the plant. He explained that the rationale behind the company’s plans to construct waste treatment facilities across the country was in line with the President’s vision to make Accra the cleanest city in Africa, and by extension the entire country. He commended the President for setting up a Sanitation Ministry. Present at the ceremony were the Bono East Regional Minister, Mr. Kofi Amoakohene, and the Paramount Chief of the Techiman Traditional Area, Oseadeeyo Akumfi-Ameyaw IV.